This story of music, love and legacy centers on a beloved after-school drum corps that draws on Pan-African culture to mentor youth in Louisville, KY. Free for Dartmouth students! 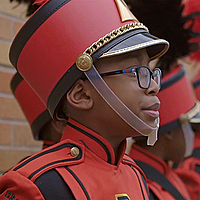 For nearly three decades, Edward "Nardie" White has led an after-school community drum corp drawing on Pan-African culture and music to mentor youth in his West Louisville neighborhood. Now in his sixties, Mr. White feels he must step down to allow the drum corp to evolve with a new generation. Wowing audiences at SXSW, this uplifting documentary follows Mr. White's final year and the training of his successor Albert Shumake, a young man whose troubled life was transformed by the drumline.

Over the years, the drumline has been a lifeline for many children navigating personal struggles and adversity, including high school seniors Imani and Jailen, and pre-teen Emily. During this transitional year, Mr. White and Albert reflect on the tragedies and triumphs in their lives, and the legacy Mr. White and the drumline group created against the backdrop of the American South. With compelling characters, evocative visuals, and powerful drumline performances, River City Drumbeat is a testament to the power of art, love, and community in building purposeful resilience across three generations. D: Marlon Johnson and Anne Flatté, US, 2020, 1h35m

This fall, all Hop films will be presented virtually and on demand through Eventive. Hop Members and Dartmouth students get tickets to these films for free! Log in to the Hop website as usual, get your ticket, and in your Order Confirmation email from the Hop Box Office, you'll receive links and instructions to watch the film on Eventive.