The Atlanta native seeks to foster “radical empathy” with a focus on Black women’s experience. 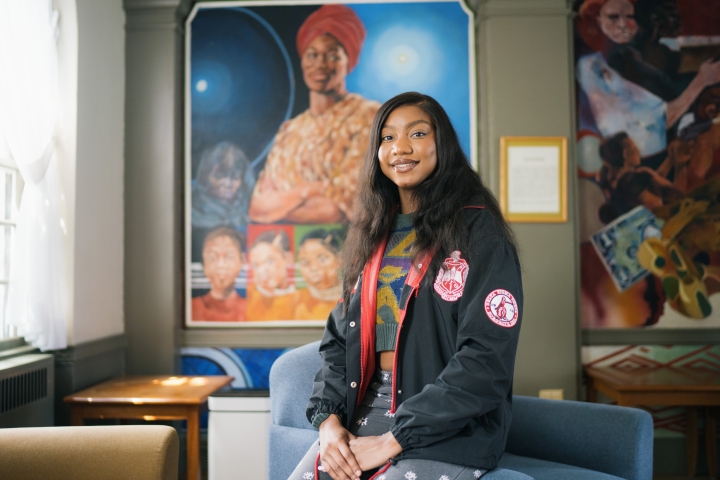 Kiara Cannon ’22 in the Mural Room of the Shabazz Center with the panel depicting Betty Shabazz, the widow of Malcom X, behind her. (Photo by Eli Burakian ’00)
Body

Taking Shamell Bell’s “Black Arts Movement” class in her junior year crystallized for Kiara Cannon ’22 the power of creative expression as a tool of liberation.

“Dr. Bell encouraged us to make a vision statement and memorize it,” Cannon says, reading a saved version from her phone:

“I want to use the power of digital art, film, and storytelling to universalize radical empathy and honesty in the digital age, centering Black women along the methodologies of radical healing and love.”

A film and media studies major modified with African and African American studies, Cannon says this vision informed her work across disciplines and subjects—as a Historical Accountability Student Research Program Fellow at Rauner, her work with the Dartmouth Black Lives oral history project, and her culminating film project.

My journey at Dartmouth has been a true liberal arts experience.

It also applied to her design-thinking studies, German language, and history classes, and her service work within Delta Sigma Theta, the historically Black sorority founded in 1913 at Howard University.

“My journey at Dartmouth has been a true liberal arts experience,” says Cannon, who received a Gates Scholarship as a high school senior, one of only 300 students to receive the funding each year.

The Atlanta native, who excelled in the sciences in high school, originally thought she might study astrophysics at Stanford, but Dartmouth’s financial aid policy of meeting 100% of demonstrated need drew her north, despite her qualms about the climate. After arriving in Hanover, she decided to rethink her major.

“I realized very quickly that I did not want to pursue the eight- to 10-year bid—the ongoing undergraduate, graduate school, and post-grad research typically required for astronomy or astrophysics.”

She says she had always felt an artistic passion for film, but never thought of it as a career option.

Cannon’s fellowship in spring 2021 with the historical accountability program also reflected her interest in digital design and her artistic vision. She looked at the legacy of Black student protest at Dartmouth from 1968 to the early part of the 21st century. “I really like the fellowship because it’s very broad. It gives you a lot of agency in how you want to manifest your insights from your research,” she says. “Because I’m a film major, I wanted to analyze protest art—like flyers and pamphlets—looking at how this liberatory protest was propagated throughout campus.”

One of the archival documents Cannon looked at in her digital project was “The Redding Report,” a 1974 examination of Black student life at Dartmouth, compiled by Afro-American Society authors Eileen Cave ’76, Monica Hargrove ’76, and Judi Redding ’76.

Officially titled “Institutional Racism and Student Life at Dartmouth,” it critiqued the successes and failures of the policy recommendations of the “McLane Report,” authored by the Trustees Committee on Equal Opportunity in 1968, on improving the racial climate on campus in the wake of the assassination of Martin Luther King Jr.

As a student researcher in the Dartmouth Black Lives oral history project, Cannon drew Hargrove’s name for her subject.

In the interview, Hargrove, who went on to become an antitrust trial attorney for the Justice Department and later associate general counsel to US Airways, spoke about growing up in Atlanta during the civil rights movement and her experience as a Black woman in the first graduating class of women at Dartmouth.

“Colleagues have described Kiara’s work as brilliant, and her by extension. I’ve found her to be a remarkable talent and resilient young person—we are all the richer for knowing her,” says Keaton, who,  along with cinematographer Shevaun Aysa Mizrahi, a lecturer at Dartmouth, was an adviser for Cannon’s culminating film project, Paper Girl.

Rabig says Cannon’s “insight and careful research into the life of Monica Hargrove—and I think their personal connection—resulted in a very valuable oral history of an important figure in the Black experience at Dartmouth.”

Cannon’s film project, Paper Girl, the story of a “Black woman’s struggle to escape her financial confines and find liberation through artistic expression,” will debut June 8 at the Film and Media Studies Senior Showcase, which begins at 7 p.m. in Loew Auditorium of the Black Family Visual Arts Center.

The event will be followed by a question-and-answer period with the filmmakers.