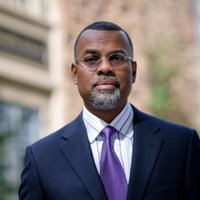 Eddie S. Glaude Jr. is chair of the Department of African American Studies at Princeton University. He is the current president of the American Academy of Religion. His books on religion and philosophy include African American Religion: A Very Short Introduction and Exodus! Religion, Race and Nation in Early 19th Century Black America, which was awarded the Modern Language Association’s William Sanders Scarborough Book Prize. Glaude is also the author of two edited volumes, and many influential articles about religion for academic journals. He has also written for The New York Times and The Huffington Post. His latest book, Begin Again: James Baldwin's America and Its Urgent Lessons for Our Own, will be published by Crown in April, 2020.

Glaude is a scholar who speaks to the black and blue in America. His most well-known books, Democracy in Black: How Race Still Enslaves the American Soul, and In a Shade of Blue: Pragmatism and the Politics of Black America, take a wide look at black communities and reveal complexities, vulnerabilities, and opportunities for hope. Hope that is, in one of his favorite quotes from W.E.B Du Bois, “not hopeless, but a bit unhopeful.” Other muses include James Baldwin, Malcolm X, and Bobby “Blue” Bland. In addition to his readings of early American philosophers and contemporary political scientists, Glaude turns to African American literature in his writing and teaching for insight into African American political life, religious thought, gender and class.