The class is building a digital record of the Black experience at Dartmouth. 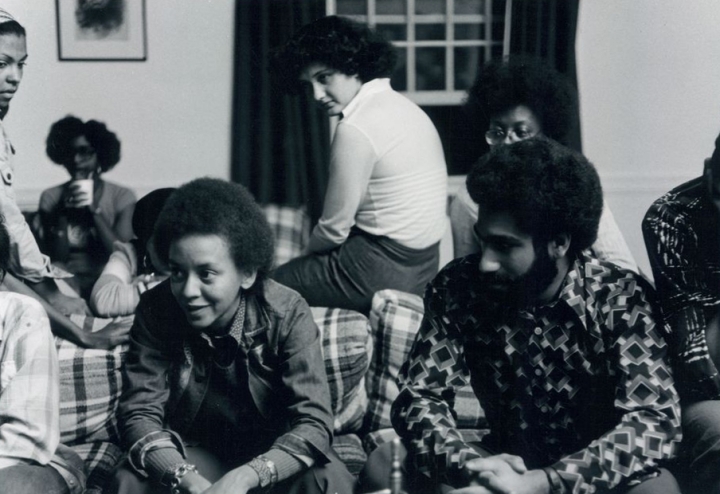 Students socialize during a gathering of the Afro-American Society on campus in the 1970s. (Photo courtesy of Dartmouth Library Digital Collections)
Body

When Nelson “Nels” Armstrong ’71 arrived at Dartmouth, one of only 17 Black students in his class, he struggled to fit in.

“He wasn’t invited over to dinners with professors, but his white fellow students were. He wasn’t involved in Greek life because that was predominantly a white scene, and he didn’t join a ton of the other clubs and societies, because of this same sort of division,” says Liana Laremont ’24, who interviewed Armstrong for “Dartmouth Black Lives,” an oral history class which started its second year this week.

Armstrong’s feelings of isolation were just the beginning of the story, Laremont says. As an undergraduate, Armstrong worked with the William Jewett Tucker Center’s Black student recruitment program. After graduation he stayed on with the Office of Student Counseling, mentoring and welcoming Black students into his home, and he became an adviser to the newly formed Afro-American Society. In 1972 Armstrong co-founded the Black Alumni of Dartmouth Association, served as an adviser to then-President James Wright, and served as director of Alumni Relations for 12 years until his retirement in 2009.

Laremont’s interview and research on Armstrong is one of 11 oral histories students in Associate Professor Julia Rabig’s class, Dartmouth Black Lives, produced last fall. The course, which is co-taught this year by Lecturer of History Darryl Barthé, continues this term with the work of collecting stories of the Black experience at Dartmouth and building the digital archive in the Dartmouth Library with support from the Dartmouth Digital History Initiative. The class is offered by the Department of History and the Department of African and African American Studies.

The project grew out of an open letter that Black students, faculty, and staff presented to Dartmouth leadership in 2020 calling on the institution to implement widespread change following the deaths of Breonna Taylor, Ahmaud Arbery, and George Floyd, Rabig says.

“What students are uncovering in these interviews is useful for understanding what’s happened at Dartmouth over the past half century in terms of the role that Black students have played, how they have made space for themselves in this institution, the impediments, and the kind of discrimination they faced,” Rabig says. “It will give students some tools for thinking about what was happening then and what’s happening now in this ongoing struggle for racial justice and equity.”

If there is only one thing that I hope students take away from this class, it is that each and every one of us has a history that is relevant and worth preserving for posterity.

The course also focuses on modern oral history theory and techniques. Students learn interview methods, oral history documentation, and they conduct research in Rauner Special Collections Library on their subjects before meeting with them. Each student must complete a digital exhibit that puts their subject’s life in context using photos, art, documents, and other materials, Rabig says. Laremont, a government major modified with economics and philosophy, says, aside from getting the opportunity to share Armstrong’s inspiring story, she gained valuable skills that will carry over to life after Dartmouth.

“I also learned skills I can actually use, not just random econ/math equations that I’m never going to look at again. It was cool to learn about oral history interviewing and the right way to speak to someone—not to interject or frame questions very narrowly—and how to listen,” Laremont says. “And I learned to use the Omeka-S platform (a web-publishing platform used by Dartmouth Library for multi-media digital exhibits), which is very cool, and hopefully something I can use in the future as well.”

Barthé, whose work includes research on Louisiana Creole history, says he makes extensive use of oral histories in his own work.

“This is because I believe that the historicization of people’s everyday lives offers more insight into the human condition than the sort of ‘heroic’ narratives that characterize the ‘Great Man Theory’ of history,” Barthé says.

“If there is only one thing that I hope students take away from this class, it is that each and every one of us has a history that is relevant and worth preserving for posterity.”