"Of Silence and Words" - with Kianny Antigua, Author & Lecturer *This is a free non-ticketed event, open to the community. 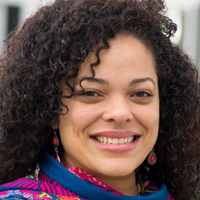 Kianny N. Antigua is a Senior Lecturer of Spanish, translator, and fiction writer for both children and adults, and poet. She has published ten books of children's literature, four of short stories, two collection of poems, a novel, an anthology and a book of microfiction. She has won more than fifteen awards, among them: First Place at the International Latino Book Awards for Most Inspirational Children’s Picture Book – Bilingual, 2018; Premio Letras de Ultramar, Children’s Lit., in 2015 & 2017, and in 2016, the XV Concurso Nacional de Cuento Sociedad Cultural Alianza Cibaeña. The same year, she was the honored writer of the XIII Book Fair of Dominican Women Writers (NYC). Many of her texts have been included and published in anthologies, literary magazines, newspapers and textbooks. Some have been translated into English, French and Italian.

*This is a free non-ticketed event, open to the community.

This event is part of the 2020 MLK, Jr. Celebration.  For a full schedule of events visit www.dartmouth.edu/mlk